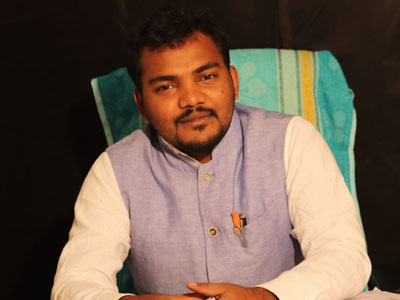 It is a beautiful thing when a career & a passion come together. Mr. RakeshDebnath the founder, editor & publisher of Sambad Safar(Hindi Newspaper) https://sambadsafar.in/ & Siren News (English Newspaper) https://www.sirennews.in/ . He is not only a writer but also a good editor, publisher & organizer.

Rakesh Debnath is born in Gakulpur Purba Dhajanagar Village, Tripura to a Tripurian Nath family. He comes from a family of middle class. His father Narayan Debnath, is the Government Servant of Tripura State Government Employee (Social Education & Social Welfare Department). Rakesh Debnath is the eldest son of his parents and has one younger brothers and a sister. His mother Kajal Debnath also inspired him to work in the field of literature & culture.

He wrote much type of poems, stories, dramas, novels etc. More than his 14 books is published various subjects and various languages. More than his 500 above writing published in different National and International journals. Awards and Honours have been showered upon Mr. Debnath, in recognition of his appreciable contribution in the field of Literature, Journalism, Cultural and Social activity. He is good at every branch of arts. He started writing from his childhood. He opted for writing in the field of publication. Rabibar Group or Rabibar Foundation (a publishing house & socio-cultural organization) has organized many a cultural program like competition based events, honour & award giving to the distinguished persons, book fair etc.

The 'Sarovar Festival & Book Fair' which started in 2013, is a place for pleasure, fun, enjoyment & get-together. Rakesh, who came of a middle class family, did much for the spread of communal integrity, healthy cultural environment in fairs & festivals. On 2013 to 2015 every year this festival is organized by Rakesh Debnath. His individual achievements are as follows; Mr. Rakesh Debnath was the editor & publisher of 'Rabibar' (Magazine), 'Kheya'(Magazine),  'Tumi Nari Aparupa'(Magazine) 'Sambad Safar'(Weekly Newspaper) etc. The 'Rabibar' is the most circulated literature & science based monthly magazine in the north-east region (first published in 9th May, 2010). The 'Sambad Safar' is a weekly Newspaper which is very popular in Tripura (first published in 18th Oct, 2012). Life style based magazine 'Tumi Nari Aparupa' is favourite to all the young people (first published in 9th August, 2013). The 'Kheya' is a research based magazine which is loved by all the intellectual people (first published in 19th May, 2014).

Presently Rakesh is very much involved in Journalism & Social activities. As a secretary & co-coordinator of 'Matri Bhasha Mission', he took a lot of initiatives to promote awareness of linguistic, cultural diversity & multilingualism. He introduced first state level Matribhasa Utsav in 2014 at Udaipur Town Hall in Tripura. He got many an honour & award for the activities in the field of literature, Journalism, Arts & Culture. He has written a lot of books on various subjects.

Also he known as a good social activist for poor people, every year he give to poor student education support and free teaching, for their education development. He motivate today’s generation to support this nation develop in literature, culture and social work. More than thousand above young generation and old general people also work his direction for support our poor people.

He is a popular name in the field of Literature, Culture, and Social activist. He is a multi-talented man of composing performances. His work includes Organizer, Journalism, Book composing, Literature, Poetry, Lyricist, Producer, Promotion of Social and Culture, Promotion of Literacy, Education reforms etc.

Debnath was the founder editor of Rabibar Magazine a literature & culture base magazine started publishing from 2010. Constantly he works in this field; he started weekly newspaper Sambad Safar, Kheya (literature based magazine) and Tumi Nari Aparupa (Woman’s lifestyle based magazine). He also worked at Bangla Ek Nazar Newspaper, West Bengal as a Sub-Editor. After 2018, September he appoint as a Editor In-Chief of www.sirennews.in. Now he is an Owner, Editor & Publisher of Sambad Safar(Hindi Newspaper) https://sambadsafar.in/  & Siren News (English Newspaper) https://www.sirennews.in/.

He is an Indian Singer - Songwriter from Kolkata, West Bengal. He also has known lyricist and composer of Tolly wood industries, 'Meghla Dina Ekla Ami' album is his first entry in singing field. After this album release he continue work more than song, like- Khelagharer Majhkhane, Balo Durga Mai Ki Joy, Kakhono Samoy, Amar Laptope, Rater Akashe etc. Khelagharer Majhkhane is most popular song, which is lyric & music by Rakesh Debnath, Feathering by most popular singer Trijoy Deb. Now Debnath produced in short film, feature film and some others album.

Contribution to the Society

As an Social Worker and reputed Indian Author Mr. Debnath dedicate his life to work for support new generation to work economically background persons. He motivate to new generation to work social, literature, education and cultural development. More than thousand above young generation and various sectors person also work his direction for nation development. Many more organization and academy present to him honor and award for his great contribution in social, literature, education and cultural activity. Mr. Debnath is doing social development work by honoring his association with various clubs, NGOs and social organizations for their yearly contribution in social and cultural development. Every year he organized Rabibar Sarad Samman, SD Creation Banglar Sera Puja Samman etc. Debnath gave inspiration to people in all parts of the society to make themselves transparent, vigorous and developing themselves. In order to demonstrate the dream of new India on the footpath, they are continuing to develop footpath in a plan to improve their financial, social and education. Debnath poised to write his poems, stories and short stories, with the real and future life of the people, creating new ways to save the lives of literary and countries different cultures. Debnaths contributions to poetry, social service, literature and the society which has given itself to society are infinite. In his words – Where life is beautiful, time is over there, where to surviving life, there is no time indefinite.

Contribution to the Field

Rakesh Debnath is an Indian author, columnist, novelist, poet, lyricist, organizer, publisher, motivational speaker, editor, film personality, social and cultural activist, known for his Indian-Bengali poetry and social-cultural activity. His contribution in literary, educational, social and cultural works has won global recognition. He has authored 14 books till this date. The publications include: Ajana Rahasher Mahakash(A Book of Space and Universal Science), Chara Chorir Mela(A book of Children Rhymes), Morichika Prem(A Collection of Bengali Poems), Cinema Quiz(A Book of Cinema Related Question), Mahakash Quiz(A Book of Universe Science Related Question), Jibanu Quiz, Paribesh Quiz, (A Book of Environment Related Question), Gachpala o Pranider Boiganic Naam, (A book of scientific name), Swapnocharini Tomake, (A Collection of Bengali Poems By Rakesh Debnath), Abishkriya (A book of Bengali poetry), Samporka (A most popular book of Bengali poetry), Bichitra Pranir Bichitra Katha (A book of animals encyclopedia), Love Only for You Some Poetry for You (A most popular books of english poetry), Amar Anu Kabita (A short poetry of Benhgali) etc. His upcoming books are: Hindu Hindutva and Sanatan Dharma. He organized many more cultural event and leads many social activity like: Sarovar Utsav, Book Fair, RPA Journalism Award, Bharatiya Sahitya Sanskriti Puraskar, Best Sochool Award, Footpat(A Project for poor people who struggling their life in footpat, for develop their economical and educational development based project), Clean Village My Village etc. He got many honor and award for the activities in the field of literature, social, art and culture. As a good journalist now he is an editor in-chief of www.sirennews.in / www.sambadsafar.in / www.sambadsafar.com News & Web Media.